Remember the Alamo… I mean the 2007 Republican Debate.

McCain states in the video that he believes in evolution, but then adds that the “hand of god” can be seen in the Grand Canyon at sunset. In essence he gives a non-answer; he sits his ass on the fence. It’s almost as if he had rehearsed his response, but for a moment forgot the second half of the answer, the part that appeases the creationists. (Line, line. Where’s the director? Where’s my bottled water? The teleprompter isn’t working and neither is my ear-piece. Someone get me a moist towelette. I’m John McCain, a freaking war hero.)

I’m convinced that McCain actually does “believe” in evolution. But I also think he desperately wants to be president, and will say anything, or do almost anything, to attain and keep that position. If he has to be indirectly responsible for damaging science education, so be it. If he does win the election, he’ll most likely fuel a new creationist fire, for the very reason that he needs the approval of the Christian-right. He’ll be their enabler. Earlier this year, he courted the Intelligent Design vote. And Intelligent Design is just creationism with an easier-to-swallow coating. (But it’s still a hard pill to swallow.)

Don’t forget the 2007 Republican Debate… or the Alamo. 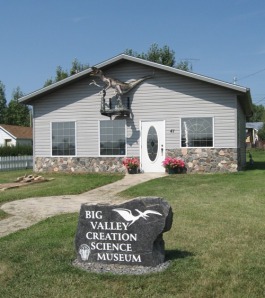 According to a new poll, about 58% of Canadians accept evolution while 22% think the human race was “created in their present form within the last 10,000 years”. The rest are unsure. What’s surprising is that the frozen, bacon munchers to the north are only slightly more scientifically literate than Americans. (A previous poll indicated 53% of Americans accept evolution). That 5% difference adds up to America having a $27 million dollar creation museum while Canada has a shack. But don’t despair, both American and Canadian Creationists use the same hackneyed arguments to support their pseudo-scientific nonsense. All the money in the world can’t pollish a turd.

P.S. A visitor to the Canadian shack is quoted as actually saying, “We drove 2,000 kilometers to come see this museum.” Even if the price of a gallon of gas were 10 cents it wouldn’t have been worth it.

Filed under Trawling For Creationism 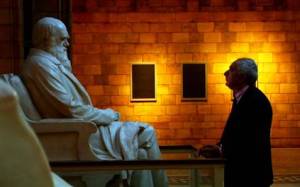 I guess actually reading Darwin’s books was too difficult for Ben Stein, so instead he stood in front of a statue and contemplated what evolution might be like. This is, of course, Stein trying to mark evolution as a religion, and not a science, something the Intelligent Design crowd has been trying to do for years.

Arthur Caplan, a Bioethicist at the University of Pennsylvania, has written a stinging review of Expelled: The Movie titled Intelligent design film far worse than stupid: Ben Stein’s so-called documentary ‘Expelled’ isn’t just bad, it’s immoral. It really gets at the root of Intelligent Design propaganda. In the movie, Ben Stein links Darwinism with Nazi Germany and the Holocaust. Never mind that other creationists blame Darwin for communism as well as capitalism. Doesn’t Stein like capitalism?

The challenge for creationists is for them to make their point without mentioning evolution. I know scientists can speak of evolution without even broaching the subject of a creation or design. But propagandists like Ben Stein cannot further their cause without tearing down evolutionary biology. The reason is they have nothing to support their claims. Intelligent design isn’t a science and cannot stand alone.

And I want to know why Stein brings religion into the Intelligent Design argument, when for years other Intelligent Design proponents have tried to keep the two completely separate. Is ID science or religion? You creationists need to make up your minds.

February 12th is Charles Darwin’s birthday (Feb 12, 1809 – April 19, 1888). And people world wide are celebrating his life and remembering his achievements. Unfortunately the average person seems to know very little about Darwin and his work. Creationists systematically slander the man without actually having read any of his books. And public school teachers are forced to expose their students to dry factoids and poorly written textbooks. But there is much more to the fascinating history of evolutionary biology and its founder. Countless resources are available online for those who have an interest in learning more about Charles Darwin the man, the explorer, the naturalist, and, of course, the scientist. Here are just a few:

About Darwin: Dedicated To The Life And Times Of Charles Darwin

University Of California Museum Of Paleontology

Check the web and see if a university near you is hosting an event.

HAPPY DARWIN DAY TO YOU ALL!

After a night of partying (or not partying), let’s begin 2008 by appreciating a small corner of our beautiful planet Earth. The Galapagos Islands were where Darwin stopped to smell the ‘roses’, so they come highly recommended. Enjoy!