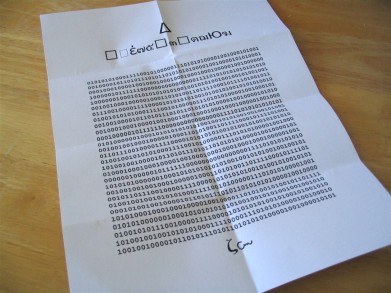 Here we go. Obama’s real birth certificate is finally revealed. He was born in a foreign land in a galaxy far, far, far, far away. That’s why he’s of superior intelligence –and why his uber-detractors appear moronic in comparison. But not even Obama is perfect; he was born to parents who were only moderately telepathic. See, it’s right there on the form, plain as day, near the top -01001001001. And check out his given, middle name -011101101010. Ha, ha, ha! It’s the same as the last name of an infamous inter-galactic gangster who’s wanted in three systems for spice smuggling. And it’s all certified by an android registrar, there at the bottom. And androids don’t lie.

The hard-core birthers –the ones who are mulishly clinging to the belief that Obama was born in Kenya– are now waving  about an obvious forgery of a Kenyan, birth certificate, as proof of their conspiracy theory. Take a look at the so-called document. This is perhaps the first birth certificate I’ve seen that fails to mention any details of the baby –no weight, or race, or time of birth.  Obama’s mother was Caucasian and his father was black, and that certainly would have been recorded, especially in the 1960’s. Thousands of white Europeans were living in Kenya  –a British colony back then. A birth to a mixed-racial couple surely would not have gone unrecorded. But no section for entering race is even provided on the form. And no section is provided for the doctor’s name, signature, or office address. What’s most suspicious is the size of the paper and all the wasted space. Would a birth certificate from that time period would be printed on a full 8.5″ x 11″ sheet? –the document in question is clearly of those dimensions. My own birth certificate is a third that size. The whole point of using small paper is that printed records are traditionally stored in filing cabinets, or boxes, or large books, which take up space. So, the smaller the better. In a single lifetime, or beyond, how many times is an official, government copy of  a birth certificate going to be accessed — once or twice, or never? Searching through a filing cabinet full of 8.5″ x 11″ papers –which are generally stored horizontally –is highly inefficient, unless Kenya’s civil servants are trained to hold their heads tilted to one side for extended periods of time.

P.S.  Every popular conspiracy theory appears to contain the same contradiction. According to the theorists, the powerful conspirators are resourceful enough to orchestrate a grand lie, but not so much when it comes to keeping it a secret. They always leave a trail for the amateurs to follow. Not a very likely scenario.

All the other flaws in this forgery are listed here.