My Vision Of Hell

Christians regularly tell me I’m headed for hell for being a freethinker. But when I try to imagine this fiery underworld, my mind falls short, and all I see is spending an eternity with them  –an army of pious brain-dead conservative robots, dressed in matching polyester outfits, oafishly shuffling about under twinkling chandeliers and gaudy lighting, to the most insidious, elevator music ever conceived. It’s an intellectually barren world where the only shape is a square. I’m afraid even considering its existence. Now, peer into my hell, if you dare.

The rugged gentleman on the left is Captain Ahab (as played by actor Gregory Peck), the obsessed whaler who hunts down Moby-Dick, the great white symbolic whale. The individual on the right is Australian-born conservative Christian, Ken Ham, the crazed founder of the infamous, Kentucky creation ‘museum’. Is it just me or is there a slight similarity between the two –in appearance and obsession level? If you don’t see it, then just pretend for the sake of the cartoon. 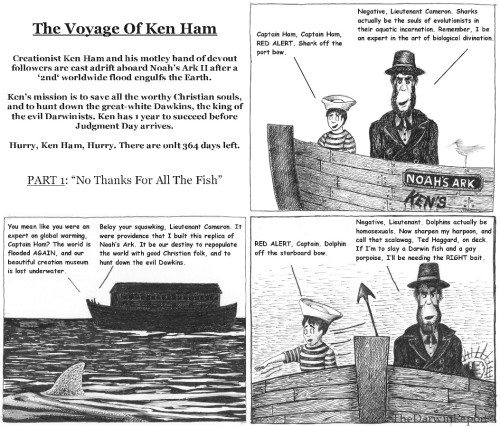 A Creationist Clown Show From Canada

I have oodles of fondness for Canada. But I draw the line at accepting its trash. Recycle your own shit, Canada. I refer here to Ian Juby, creationist and clown extraordinaire. His claim to fame is that he’s opened a creation ‘museum’. Take the virtual tour and you’ll see that he’s using Michael Behe’s bacterial-flagellum argument for design –years after it was completely demolished. To be a creationist after all is to live in the land that time forgot. Juby’s videos are even more laughable. Talk about laying on the maple syrup thick –he addresses his audience while wearing a safari outfit, as if he’s trying to convince everyone he’s recently returned from an expedition. I think I saw him sweeping hay at the petting zoo. And I thought it was annoying when TV doctors wear scrubs on talk shows. But his level of creation argumentation is easily summed up in this one sentence.

“Do you think a frog can turn into a prince?”

Pure genius. Of course, he’s addressing a room full of children and their gullible parents. But I think the point here is that he’s attempting to indoctrinate and not educate. I cannot imagine real scientists feel the need to dress in their travel gear when they’re lecturing and they’re not actually in the field. For example, I don’t think the late biologist Ernst Mayr, who traveled the dangerous wilds of New Guinea in the 1920’s, ever spoke before a Harvard audience while wearing jungle fatigues. The Barnum-and-Baily-style antics are only necessary when the material is thin and specious. How incredibly degrading and condescending it is to watch children being treated in this fashion. Screw you, Canada, for not securing your borders.

Filed under Creationist Of The Month Club

I invariably regret it when I check out the insipid stories linked through AOL News. (Old e-mail accounts are a burden.) Not only is the quality of the reporting from these junior outlets surpassed by that of any high school newspaper, the comments left, which I can’t help from browsing — are inherently vacuous. This time the story I fell upon is about an unfortunate 4-year-old boy, named Luke, who was struck by a foul ball at a baseball game. He suffered a skull fracture and is currently in a medically-induced coma. The reporter and several of those who left comments couldn’t help but stick religion in the reader’s face. The reporter said:

Maybe this nutwing will never know why it happened, but I already know. And I think I may speak for all reasonable people when I say they know, too. It was a mere accident. Even the distraught mother said so in the video. And why would a well trained and responsive medical team restore my faith in faith? A commenter took the god slant further:

May God’s healing hand touch this precious young boy. I pray God is with his parents, giving them strength and faith in this critical time of his recovery. Also, prayers for the ballplayer, may he find comfort and peace.

In tragic cases such as this, religious minions are quick to grab credit for their non-existent deity. If the boy survives god will receive their praise, even though god didn’t prevent the accident. But if the boy dies, I’m sure the same minions will lay blame elsewhere, on the non-existent devil, perhaps. It’s not like the god of the Old Testament ever killed a child –well, except in some of those fire-and-brimstone stories, which are simultaneously and conveniently open to wide and narrow interpretation. That worldwide flood must have killed millions of innocent children. On the other hand, modern medicine has saved countless. Who to trust?

When tragedies occur and people insist on praying for deliverance, the one thing I find most insufferable is that humans can’t admit to themselves that they are sometimes helpless. Prayer is the delusion of certainty that humans have control over everything just by asking the Sky Daddy to intervene. And encouraging children to believe in prayer sets them up for disappointment when god doesn’t provide. Pray to your heart’s content, but don’t expect me to join in, and don’t condemn me as a heartless bastard when I don’t. Supporting modern medicine and reason is the best way to help children like Luke.

The entertainment world is on fire with the rumor of another creation movie from Kevin Miller, the maker of Expelled. The story is to be based on the life of evangelist creationist Kent Hovind, a.k.a. Dr. Dino, the tax dodger, the prison bitch.

In September 2009, Resurrection Pictures is partnering in the release of The Secrets of Jonathan Sperry—a heartwarming coming-of-age story about three 12-year-old boys who are shown how to apply Scripture to daily struggles—and is a 2009 Silver Sponsor of the 168 Hour Film Project & Festival. Creation, Resurrection Pictures’ first original film project— a humorous and tearful story of a high school biology teacher’s struggle to expose the lie of evolution, based on the life of creation evangelist Dr. Kent Hovind and written by Kevin Miller the writer of Expelled: No Intelligence Allowed is scheduled for production in 2010.

My reaction to this news can’t be expressed in mere words, so I offer you this video. Just pretend I’m the talk show host, and Kevin Miller and Kent Hovind are the guests. The fact that it’s in Dutch is irrelevant, for laughter is an international language.

The Dishonesty Of Christian Apologists

When arguing against religion, some atheists are quite willing to jump headfirst into the bottomless pit of bible verse, where Christians twist and shape scripture into whatever meaning is most convenient –but I’m not one of those atheists, generally. I like to avoid giving credence to a work of fiction like the bible, especially when it concerns scientific matters. I mean no one points to a line of Charles Darwin’s “On the Origin of Species” and declares it to be the inerrant word of Darwin; scientific theories stand or fall on real world observations, not on faith or allegiance. In science, the evidence is looked for outside of books, not inside of them. Anyway, here we go into the Pit of Despair… don’t even think about trying to escape.

ApologeticsPress.org, a Christian publishing company that does exactly what its name suggests, routinely answers those who dare find contradictions in the bible. One of my favorite unexplained errors, which AP fails to address honestly, is Judas’ death, which occurs twice in the bible –once in Matthew, and once in Acts, with two different methods of expiration, within two different story lines. The King James Bible says:

Matthew 27:5 –  And he[Judas] cast down the pieces of silver in the temple, and departed, and went and hanged himself.

Matthew 27:6 –  And the chief priests took the silver pieces, and said, “It is not lawful to put this into the treasury, because it is the price of blood.”

Matthew 27:7 –  And they took counsel, and bought with them the potter’s field, to bury strangers in.

Acts 1:18 –  Now this man[Judas] purchased a field with the reward of iniquity; and falling headlong, he burst asunder in the midst, and all his bowels gushed out.

Acts 1:19 –  And it was known unto all the dwellers at Jerusalem; insomuch as that field is called in their proper tongue, Aceldama, that is to say, The field of blood.

According to Matthew, Judas drops his booty and hangs himself, and then the priests take the cheese to buy a field for the John Does to be buried in. But according to Acts, Judas does the real estate deal, then takes a belly-busting, nose dive onto the ground. So, ostensibly, both the causes of death and the background stories are inconsistent and incompatible. In the former, Judas discards the silver and the priests buy the field. In the latter, Judas buys the field himself using the silver. Now, if the two books only differed in the method of Judas’ death, perhaps we could accept a single explanation as to why they differ, but since the details surrounding his death also fail to mesh, it’s a lot harder to see any reconciliation of the texts without applying some major rationalizations.

The Apologetics Press attempts to explain away the initial discrepancy with some not-so-subtle pasting. They argue that there’s only one death –that Judas’ guts did, in fact, spill out like a “bloated whale”, but only after he hanged himself and his body had rotted from decomposition:

According to ancient tradition, Judas hanged himself above the Valley of Hinnom on the edge of a cliff. Eventually the rope snapped (or was cut or untied), thus causing his body to fall headfirst into the field below, as Luke[the purported author of Acts] described. Matthew does not deny that Judas fell and had his entrails gush out, and Luke does not deny that Judas hanged himself. In short, Matthew records the method in which Judas attempted his death. Luke reports the end result. [AP’s emphasis]

So, the AP sees the holes in Matthew and Luke’s[supposed author of Acts] respective stories of Judas’ demise as an invitation for hole filling –with whatever fits the AP’s preconceived conclusion. But no where in the AP’s longwinded explanation do they even address the question of who bought the field, Judas or the priests. They completely ignore it. Apologists are in major denial when they refuse to acknowledge that the bible’s contradictions aren’t isolated misinterpretations, but interconnected, and cascading, failures. No contradiction is an island.

The Darwin Report
Create a free website or blog at WordPress.com.